As some of you know, I am a big fan of Sean McCoy's Mothership, having played the teamster character of Rey Burtnolds in a lot of playtests.  The good folks there at Tuesday Night games have a kickstarter out right now for an adventure called Gradient Descent that I am sure you folks are going to like.  Check it out.

https://www.kickstarter.com/projects/gerdling/gradient-descent-module-for-mothership-sci-fi-horror-rpg
at November 27, 2019 No comments:

Andrew Walter's Fronds of Benevolence, published by the Ennie award winning Melsonian Arts Council, is now available.  Check it out.

Today, I want to talk about a neat site that has a ton of public domain illustrations:  https://www.oldbookillustrations.com/   Personally, I use this site to admire technique and artists such as Gustave Dore and George Cruikshank.  Others may wish to use this site to pick from the many masterful illustrations for their book or 'zine.  Check out the following gorgeous work by Frederick Catherwood (top) and David Roberts (bottom). 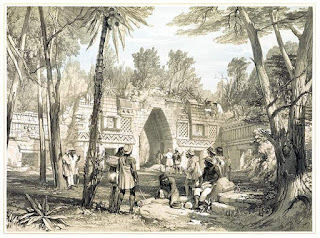 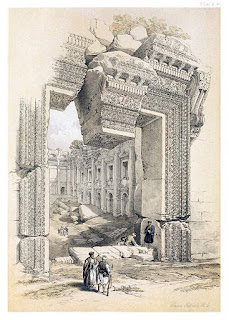 I miss the old days of comics, particularly what's now called the Bronze Age of Comics, which is just a way of saying all those cool comics from the '70s.  Other than the high quality of the writing and art, one of the many things that I miss is the look and feel of the old newsprint.  The other thing I liked about those old comics was their price.  They were cheap!  Heck, even when they went up to 60 cents a piece in 1981, a kid could still scratch together some change and buy several comics.  If you just look at federal minimum wage, a kid could buy five comics for his one hour of work versus only one comic for that same hour of work today.

Rather than lament our modern economic reality, I want to point out an option that may help those of us that want to make comics or 'zines as inexpensively as possible.  Alterna Comics, a small indie publisher, has a printing partnership program that looks to maybe fit the bill.  I can't speak for the quality of the comics (I have only recently discovered this), but they use newsprint and it seems to be very inexpensive.  Check it out, if you are interesting in publishing your comic or 'zine at a price that kids (AND ADULTS!) can actually afford!

https://www.alternacomics.com/ppp
at November 04, 2019 No comments:

Howdy, folks! I'm new to this blogging stuff, so please bear with me.  I'm a fledgling writer and artist.  I gave up the keyboard and the pencils decades ago.  Now that I have poor eyesight, a bad back and a touch of arthritis, I figured I would take up drawing and writing again.  What a great idea!

I don't think I would have ever started this blog if it wasn't for the death of Gee Plus and the encouragement of good friends.  Much love to y'all - you know who you are.

As some of you know, I am a big fan of Sean McCoy's Mothership, having played the teamster character of Rey Burtnolds in a lot of playte...